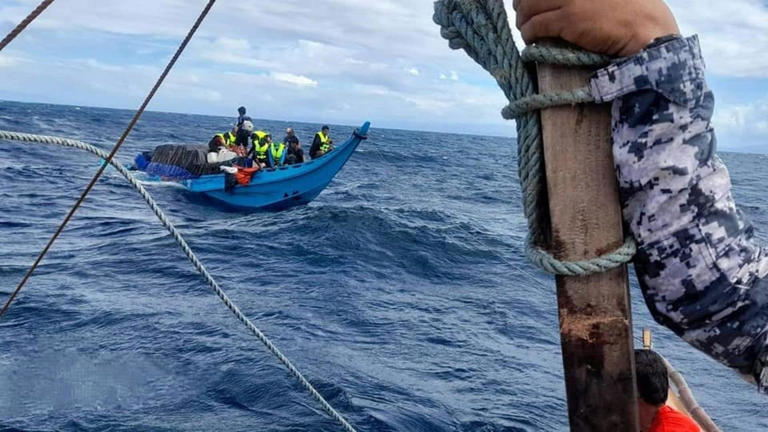 All the crewmen were from Zamboanga City.

Investigation showed that the victims were on their way to Dipolog City from Hasiman Tanjung, Jolo, Sulu last fwhen their motorbanca was damaged due to bad weather and rough seas.

The motorbanca then accidentally hit a hard object that damaged the wooden hull, causing seawater to enter the boat.

The half-submerged motorbanca drifted towards the waters off Liloy, Zamboanga Del Norte.

The Coast guard was able to communicate with the crew at around 3:40 a.m. and their location was finally identified.

The PCG then coordinated with MV Empress Amy to conduct an immediate search and rescue operation.

After eight hours, the victims were rescued, brought to the nearest shoreline, and given medical treatment.

The rescued crewmen were allowed to return to their homes later that day, while MV Empress Amy towed the damaged motorbanca to Lamao Port. — DVM, GMA Integrated News

Several ships believed to be Chinese maritime militia were spotted by fishermen in Iroquois Reef in the West Philippine Sea in this photo taken in September. The military said an average of 25 vessels have been monitored there from September to December based on their patrols. CONTRIBUTED PHOTO Dozens of Chinese vessels believed to be manned by their maritime militias in the West Philippine Sea have been moving much closer…

END_OF_DOCUMENT_TOKEN_TO_BE_REPLACED

Smuggled cigarettes worth over P400M seized in Zamboanga City this year

INQUIRER FILE PHOTO. ZAMBOANGA CITY, ZAMBOANGA DEL SUR — Cigarette smuggling is getting to be a lucrative business in this city as the police and the navy report seizing from January to November more than P400 million worth of the smuggled goods. Lieutenant Chester Cabaltera, spokesperson of the Naval Forces Western Mindanao, said the Philippine Navy had turned over to the Bureau of Customs 1,932 master cases of smuggled cigarettes valued at P87.52…

END_OF_DOCUMENT_TOKEN_TO_BE_REPLACED

USNI News Graphic These are the approximate positions of the U.S. Navy’s deployed carrier strike groups and amphibious ready groups throughout the world as of Dec. 5, 2022, based on Navy and public data. In cases where a CSG or ARG is conducting disaggregated operations, the chart reflects the location of the capital ship. Ships Underway Total Battle Force Deployed Underway 293 (USS 237, USNS 56) 104 (USS 70, USNS 34)  72 (41 Deployed, 31 Local) Ships Deployed by Fleet…

END_OF_DOCUMENT_TOKEN_TO_BE_REPLACED

Sailors aboard USS Dwight D. Eisenhower (CVN-69) depart Norfolk Naval Shipyard on Dec. 1, 2022. US Navy Photo The second oldest carrier in the Navy wrapped sea trials after completing more than a year of repairs at Norfolk Naval Shipyard, USNI News has learned. USS Dwight D. Eisenhower (CVN-69) left the shipyard for the Atlantic on Dec. 1 for four days of sea trials after 15 months in the yard. “Sea trials is an at-sea testing phase designed to evaluate IKE’s capabilities in surface…