Indonesian military chief Gen. Andika Perkasa said in an interview with Nikkei Asia that the annual joint exercise Garuda Shield will have more countries next year. (Photo by Dimas Ardian)

JAKARTA — The top commander of the Indonesian military says it is seeking more and wider joint military drills with other countries in the Indo-Pacific region — including Brunei, Malaysia and all four members of the Quad — in the face of a more aggressive China.

Gen. Andika Perkasa in a recent interview with Nikkei Asia said a U.S. military delegation will be in Jakarta in early December to discuss plans for a joint exercise called Garuda Shield next year. Annually hosted by Indonesia, the drills date back to 2007 and used to involve only Indonesian and U.S. forces.

This August, however, the exercise became the largest-ever in scale, with a total of 13 countries participating, including the U.S., Japan, India and Australia — the four members of the Quad, the security dialogue formed to counter China’s rising aggressiveness in the Indo-Pacific region.

“We’re gonna try to get even more countries next year,” Perkasa told Nikkei at the headquarters of the Indonesian National Armed Forces, or Tentara Nasional Indonesia (TNI) in the Indonesian language, in east Jakarta. “The level of … not only cooperation, but training with India, Japan, Australia, the U.S., also other countries — let’s say, France — I think it’s very important.”

Perkasa said of the 13 countries, only five committed troops in August: Indonesia, the U.S., Singapore, Australia and Japan. “Next year, we expect to have at least 12 countries committing troops, plus observer countries — [so] more countries.”

He said this includes the potential participation of Japan’s Amphibious Rapid Deployment Brigade, a unit similar to the U.S. Marine Corps that was established in 2018. Japan joined Garuda Shield for the first time in August but only took part in an airborne training exercise.

An amphibious exercise during the August drills was conducted on Singkep Island, located in the same province as the far-flung Natuna Islands. Indonesia’s exclusive economic zone (EEZ) off Natuna has been at the center of its maritime dispute with China, as the waters overlap with Beijing’s self-proclaimed “nine-dash line” covering nearly the entire South China Sea. Chinese fishing vessels and coast guard ships have often entered waters off Natuna in recent years, fueling tension with the Indonesian military. “I’m not gonna be embarrassed to say this, but our ability to operate patrolling in our EEZ around Natuna is only [for] days … because we need to get resupply,” he said. “If we could also do it in Malaysia [and] Brunei instead of only Indonesia, that’s gonna [allow] us to operate in that area for a much longer time.”

Perkasa added the TNI is also “committed” to taking part in joint drills in the French territory of New Caledonia in the Pacific next year, as well as in Australia.

He said joint military drills are important to improve teamwork with “friends and neighbors” to offset Indonesia’s limited defense budget, which represents just 0.9% of the gross domestic product of Southeast Asia’s largest economy. He added that only 30% of TNI’s proposed budget this year was approved and said it needs “way more than” that but stopped short of citing an exact amount. 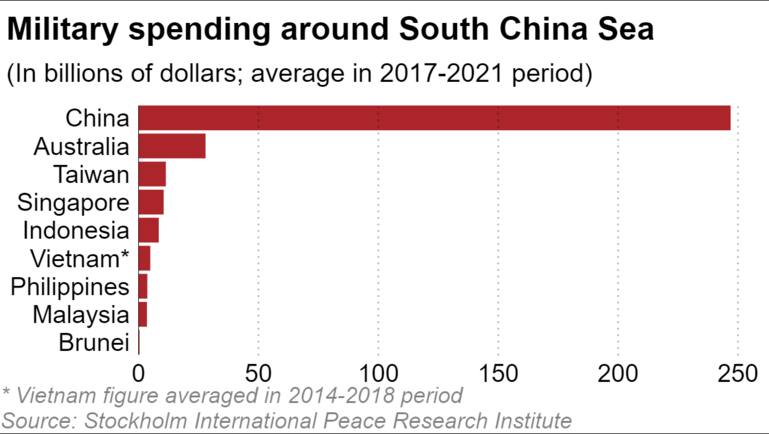 Drawing lessons from Russia’s invasion of Ukraine, Perkasa said he realized “nothing is impossible,” though he carefully avoided mentioning China as the potential threat in Asia.

“Almost no one predicted that” the war in Ukraine “would happen, but it did happen. So I think we are also very realistic that things like that could happen” in the South China Sea.

Teamwork with other countries’ militaries helped the TNI protect the Group of 20 summit on the Indonesian resort island of Bali on Nov. 15 and 16, as they shared intelligence information to monitor the security situation, and Perkasa said that “made my job easier.”

He added these joint exercises are also expected to improve teamwork between Indonesia’s army, navy and air force. “When it comes to joint operation — meaning different services doing operation at the same time — I have to admit that we’re not as good as other countries” that have doing it for longer.

Perkasa’s remarks came on the heels of Indonesian Defense Minister Prabowo Subianto’s recent visit to the Chinese city of Xi’an at the invitation of Chinese State Councilor and Defense Minister Gen. Wei Fenghe. During their meeting, Wei stressed the need for both countries’ militaries to “maintain close strategic communication” and “deepen pragmatic cooperation,” according to a written statement published by the Chinese Embassy in Jakarta.

Perkasa, however, said joint exercises should come “from both sides.”

“We just couldn’t force any country to do exercise with us if that country thinks that perhaps [it is] not a priority,” he said, adding that the last time the TNI held joint drills with China was in 2012-13, and they were only at the squad level. 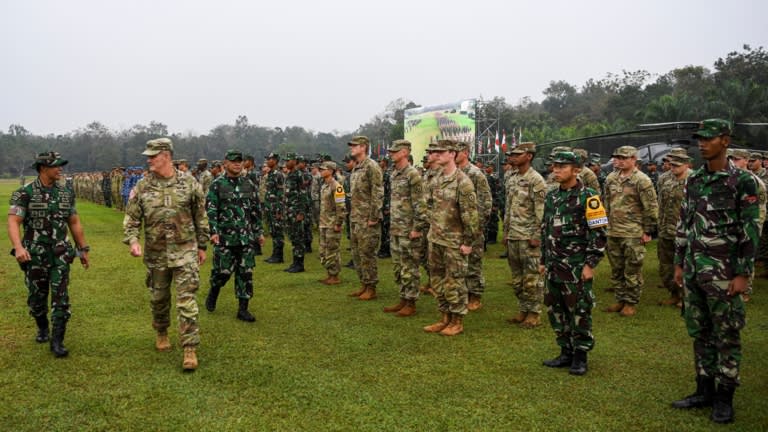 Perkasa and the commanding general of U.S. Army Pacific, Charles Flynn, inspect troops during the opening of the Garuda Shield joint exercise in Baturaja, South Sumatra province, on Aug. 3. (Photo by Antara Foto via Reuters)

By contrast, Garuda Shield in August was joined by around 5,000 troops from different branches of the Indonesian, U.S., Singaporean, Australian and Japanese militaries.

Perkasa also told Nikkei that the TNI is planning to move around 2,700 soldiers to Indonesia’s new capital city, Nusantara, on Borneo by 2024 and plans to build their houses and some offices next year. Under President Joko “Jokowi” Widodo’s ambitious capital relocation plan, not only the seat of the government but also the headquarters of the TNI and the National Police will be moved to Nusantara. Widodo told Nikkei in an interview on Nov. 17 that he is still targeting to hold Indonesia’s Independence Day ceremony on Aug. 17, 2024, at a new presidential palace that will be built in the new capital.

Perkasa, who will turn 58 and enter retirement in late December, gave a noncommittal answer when Nikkei asked about his rumored plans to go into politics and enter the 2024 presidential election race. He was sworn in as the TNI commander only in November last year, after previously serving as the army chief of staff.

“Fifty-eight years old, I think, is too young for anyone to retire,” Perkasa said, adding that he is “not gonna answer now because I’m still [on] active military duty.”

Several ships believed to be Chinese maritime militia were spotted by fishermen in Iroquois Reef in the West Philippine Sea in this photo taken in September. The military said an average of 25 vessels have been monitored there from September to December based on their patrols. CONTRIBUTED PHOTO Dozens of Chinese vessels believed to be manned by their maritime militias in the West Philippine Sea have been moving much closer…

END_OF_DOCUMENT_TOKEN_TO_BE_REPLACED

Smuggled cigarettes worth over P400M seized in Zamboanga City this year

INQUIRER FILE PHOTO. ZAMBOANGA CITY, ZAMBOANGA DEL SUR — Cigarette smuggling is getting to be a lucrative business in this city as the police and the navy report seizing from January to November more than P400 million worth of the smuggled goods. Lieutenant Chester Cabaltera, spokesperson of the Naval Forces Western Mindanao, said the Philippine Navy had turned over to the Bureau of Customs 1,932 master cases of smuggled cigarettes valued at P87.52…

END_OF_DOCUMENT_TOKEN_TO_BE_REPLACED

USNI News Graphic These are the approximate positions of the U.S. Navy’s deployed carrier strike groups and amphibious ready groups throughout the world as of Dec. 5, 2022, based on Navy and public data. In cases where a CSG or ARG is conducting disaggregated operations, the chart reflects the location of the capital ship. Ships Underway Total Battle Force Deployed Underway 293 (USS 237, USNS 56) 104 (USS 70, USNS 34)  72 (41 Deployed, 31 Local) Ships Deployed by Fleet…

END_OF_DOCUMENT_TOKEN_TO_BE_REPLACED

Sailors aboard USS Dwight D. Eisenhower (CVN-69) depart Norfolk Naval Shipyard on Dec. 1, 2022. US Navy Photo The second oldest carrier in the Navy wrapped sea trials after completing more than a year of repairs at Norfolk Naval Shipyard, USNI News has learned. USS Dwight D. Eisenhower (CVN-69) left the shipyard for the Atlantic on Dec. 1 for four days of sea trials after 15 months in the yard. “Sea trials is an at-sea testing phase designed to evaluate IKE’s capabilities in surface…